This is quite a long one, so I’d pop the kettle on, grab a blanket and settle down for the evening if I were you…

This was another Tinder date – we bonded over our love for books and orang-utans. We chatted for a bit and it took some time to find a date that fitted both of our busy schedules!

Unfortunately that date turned out to be February the 14th. But as it’s not a date I normally celebrate, when he said ‘how about this weekend?’ I didn’t even register what day it was! Now, I have a lesson for you all. Never go on a first date on Valentine’s Day. You would think it was glaringly obvious but sometimes it just isn’t. I’ve learnt from my mistake, and I want you to learn from it too.

Anyway I arrived at the proposed meeting place (unfortunately the name fails me!), walked in and was greeted by a bundle of heart shaped helium balloons being shoved in my face by the hostess, to which I had to decline (more than once, she was very persistent and seemed to be personally offended that ‘no, I did not want a balloon to give to my valentine’). I was particularly nervous heading towards this date; I was hyper aware of all the smooching couples and the place was ram-packed! But I couldn’t find him anywhere, I was certain I’d been stood up, but instead of feeling panicked, I was almost relieved; it meant I could head back home, get in to my pyjamas and carry on watching Pretty Little Liars. Fortunately (or unfortunately, depending on how you look at it) I hadn’t been abandoned and I eventually heard my name being called.

I turned around to find the face that belonged to the voice and when I did, it took every ounce of strength I had not to utter these words ‘oh… you look taller on your tinder profile.’ Because he did! At a mere 5’3, I claim no great height so normally I have no qualms about whether they are 6 foot or not. But with me being dressed in my favourite pair of boot heels, I was towering over my date!

However, I decided to brush off my initial pre-judgements and not let this bother me, I am not size-ist! He led me back over to seats by the window which I must have passed about 3 times already; unfortunately it was a sofa and armchair ensemble that was made to seat 6, so we were not alone. It was very hard to remain focused on my date with the amount of slobbery kissing sounds coming from our new friends – only pausing/coming up for air to sip on their vodka’s.

He bought me a drink (good start) and conversation was flowing (though that’s never a problem with me as I can talk for England. Or so I’m told). All was well until the live music started. The music was great, but the noise of the room suddenly increased ten fold and I HAD NO IDEA WHAT MY DATE WAS SAYING. We were literally screaming at each other and I actually lost my voice! For real, not exaggerating! It was awful! I always lose my voice a bit when I drink alcohol, so the drink/shouting combo was no good for me. Now, not only could I not hear what he was saying, I couldn’t speak either. I was starting to despair and was desperately praying for a get out clause, and someone out there must’ve been listening because almost instantly I was handed one.

I was disrupted from my praying by a loud knocking on the window beside me, I turned to see two grinning faces waving excitedly. It was my best friend/roomie and her boyfriend (who’s like the annoying older brother I never had). I was honestly so relieved to see them, they were going to save me! I couldn’t quite believe my luck – yes we live in the same place but London is a big city and this bar was down a random side street, the likelihood of a chance meeting was so slim! I thanked my lucky stars they’d chosen to walk down this street and had spotted me.

They rushed in and I could tell by the stumbling and giggling that they had definitely been on the tequila. My BFF flung herself on me in a starfish like fashion ‘Daiiiiiissssssssy!!!! How’s your date girlyyyyy?’ She cackled, grabbing my cheeks, like a little baby. I glanced at my date, who was wearing a startled look on his face; and smiled in a way I hoped said ‘I’m really sorry about this, it’s okay I know these people’ (because I really, really couldn’t talk by this point!). Thankfully my BFFB (Best Friend Forever’s Boyfriend) took control of the situation and did the talking for a while; so now rather than a date with me, he was basically having a date with me, my BFF and my BFFB… My night was looking up, but his? Urm… not so much I think!

After another round of drinks my BFF decided, it was time to head to a club; I hesitated, I really wanted to go as I was now feeling a little bad for my date, but he seemed keen! So we left, saying goodbye to our new sucking-face friends who hadn’t paused their canoodling throughout the entire episode, and went to Scarlett’s in Leicester Square. By this time, we were well on our way to being utterly gazebo-ed (please refer to Michael McIntyre if you don’t understand that saying) but we obviously didn’t stop there. And for some reason, the more I drank, the more my date made me cringe. I mean normally it’s supposed to be the other way round isn’t it? Beer goggles and all that, but it just made me aware of how much I didn’t fancy him and how I was having way more fun with my friends. Snaps for him though because he stuck it out, we were the last ones to leave the club and our walk home took double the time due to drunken stumbling’s and distractions.

We delivered him to his bus stop to catch a night bus home and I think he was expecting an invitation back to ours – but he certainly wasn’t going to get that from me! Instead, what I did was awful. I can’t believe I did it. I patted him on the head, ruffled his hair, and with my filter no longer in tact due to alcohol, I actually did it – the fatal words came out of my mouth:

‘You look taller on your tinder profile.’ And with that I skipped off down the road, arm in arm with my BFF.

In the end, I had an absolutely cracking night! Unfortunately, this had less to do with my date and more to do with my favourite couple that I love to third wheel. We spent the next day thoroughly hungover, eating fast food, enjoying three man spoons and watching films; it was a great weekend.

This collage pretty much sums up the night… 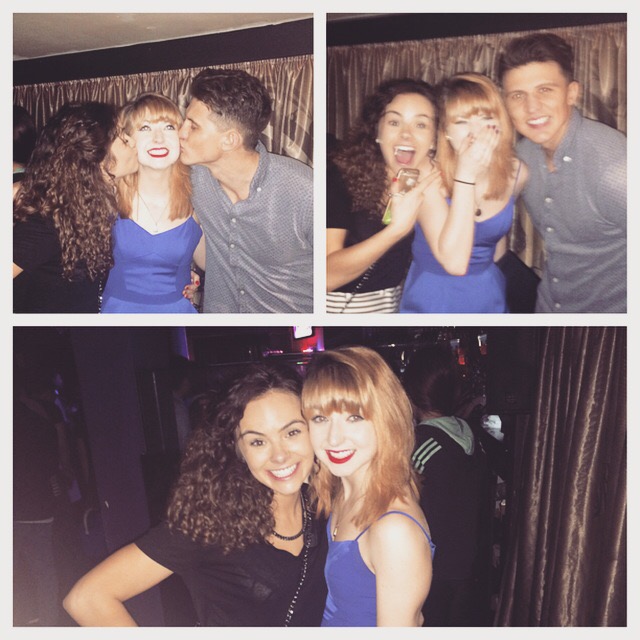 As you can tell, my date is nowhere to be seen… In fact, he was probably the one taking the photos… Oops!